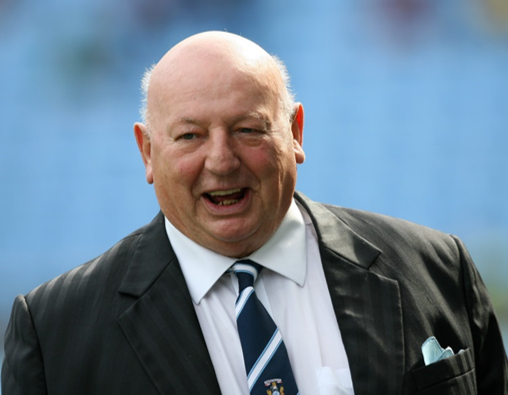 Football legend John Sillett has spoken for the first time of his remarkable recovery following surgery to correct worsening vision that left him unable to read the newspaper and prevented him from getting behind the wheel.

83-year-old Sillett, who played for Chelsea, Coventry City and Plymouth Argyle before returning to Coventry to manage them to FA Cup glory in 1987, started experiencing vision problems in recent years.

Blurred vision and clouding in his eyes was starting to impact his day-to-day life and stopping him from doing the things he loved most, including watching his beloved Coventry City, where he remains Life President.

After initially ignoring the symptoms, Sillett’s vision continued to deteriorate until he was unable to read the newspaper and he even had to quit driving out of fear he might endanger himself or other road users.

“I was really struggling with my vision. My eyesight had deteriorated over time and I couldn’t read the paper and wasn’t able to drive – it really became quite bad. At times it was like I was walking through a mist or fog, nothing was clear and it was getting very frightening. I knew I had to do something,” said Sillett.

A friend recommended he see a specialist at Midland Eye, a private eye clinic in Solihull, to look into his problems.

There, Sillett met Professor Sunil Shah, a world-renowned Consultant Ophthalmic Surgeon and pioneer of LASEK laser eye surgery. After a consultation in September 2019, Sillett was diagnosed with cataracts in both eyes and told his vision could deteriorate and ultimately result in blindness if he didn’t have corrective surgery.

A cataract is a clouding of the lens which is essential for focusing images on to the retina. Surgery is the only treatment for cataracts and involves an operation to restore the sight. The cataract, or cloudy lens, is replaced with a clear artificial lens which remains clear for a lifetime.  Approximately 330,000 cataract operations are performed each year in England alone, with around 30% of people aged 65 years or older having a visually impairing cataract in one or both eyes.

Within a few days of his consultation with Professor Shah, Sillett was back at Midland Eye to undergo an advanced laser cataract removal procedure, called a femto laser-assisted cataract surgery.

Midland Eye is one of only a handful of specialist eye centres to have the cutting-edge technology to enable surgeons like Professor Shah to operate. The surgery takes only a few minutes and involves making precise cuts to remove the cataract. It’s more precise than ordinary manual cataract removal and is favoured by many specialist cataract surgeons.

“It’s a remarkable procedure using state-of-the-art equipment”, says Prof Shah. “The femto laser surgery replaces many of the steps during cataract surgery that require a blade and softens the cataract, allowing for an easier and smoother removal.

“Mr Sillett really did require this operation, and it’s good he came to us when he did. The longer he left it, the worse his vision would’ve got. This could’ve ultimately led to blindness,” said Prof Shah.

Despite his nervousness about the laser operation, the procedure was an unqualified success:

“Eyes are special so I was a bit nervous but wanted to get back to living my life. Nothing could’ve been worse than continuing with my poor vision. I had no reason to worry though – the whole procedure was perfection, a painless five minute job. They placed a cloth over my eye and within a few minutes I was good as new. It really was incredible,” said Sillett.

“Post-op recovery was almost instant. I noticed a remarkable improvement virtually straightaway with full vision restored within hours. I was home the same day and fine within hours. It was really unbelievable.”

Thanks to the care and expertise that the former defender received from Professor Shah and the team at Midland Eye, Sillett no longer has to wear glasses.

“I’ve worn glasses of some kind for many years so not having them certainly took some getting used to! It’s only since I had surgery that I realised how poor my vision actually was.  I’m back to driving, I can read the paper without my eyes straining, it’s like I’ve been given a second lease of life. It’s completely transformed my life and I’m so grateful. I’m back to watching football games and enjoying myself”.

Sillett started his playing career at Chelsea in 1954 before moving to Coventry City and finally Plymouth Argyle. He is best remembered for Coventry’s success in the 1987 FA Cup when they beat Spurs 3-2 under Sillett’s stewardship.

And the former right-back, whose older brother Peter also played for Chelsea in the 1950s, had nothing but praise for the team at Midland Eye:

“The entire team at Midland Eye was highly professional, kind and friendly. For me, the main benefit was the speed at which I was seen, from my initial consultation to the actual operation being carried out. I honestly thought after the procedure, ‘a miracle’s happened here’. I could actually see clearly again – it was amazing.

“The fact that everything was so quick and painless is what struck me. You know, you’re worried before undergoing any procedure, especially when it’s to do with your eyes – you’re thinking what if something goes wrong? But I didn’t even realise the procedure had been done – it was made to look that quick and easy. It was painless, brilliant. If you’re in the same position, don’t hesitate to see Professor Shah and get back to seeing 20/20 again.”